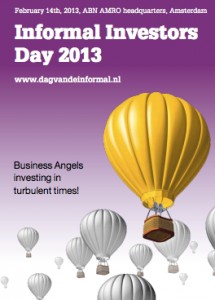 This week I found myself in Amsterdam at this event.

It was a International Business Angels Event and I was honoured to be one of the invited Guest Speakers. What was very refreshing was that there was an incredible depth of knowledge about Crowdfunding and the audience was yearning to know more about how a large dollar raise based platform performs in reality.

I gave a number of case studies of both successful and unsuccessful raises as well as some general comments on the democratization of investor finance.

I spent some time around the area where the Dutch East India Company was first established and I was amazed at the number of fully operational crowdfunding platforms that had 10 to 20 employees handling all different aspects of Crowdfunding campaigns.

One site I visited had a whole room of programmers coding several crowdfunding platforms, I doubt you would see that anywhere else at the moment. The speaking event was held in the fully equipped and impressive auditorium at the ABN Ambro headquarters and hats off to Peter Rikhof for organising such a rewarding event.

As I wandered around the canals that used to carry goods from the Dutch East India Company I couldn’t help thinking that with the Dutch being the the first to have a crowdfunding event that effectively created the first common stock company they are now venturing out in both profit and non-profit areas and charting new territory. Many of their platforms are not even seen by the public but are on large company Intranets where employees allocate the time and resources to projects they love to better the lot of mankind.

Here is a video from the day …