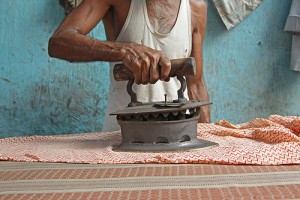 In most countries getting a few mates to invest in your early stage business is expensive, time consuming and often restricted to those that meet income and asset criteria.

The rapidly growing movement for the democratization of capital formation hopes to level the field for both investors and entrepreneurs while increasing engagement, equality and participation for all stakeholders.

Access to capital, essential for small business growth and thus job creation, has been restricted to the upper echelons of societies for a long time. The Middle Age is a stretch of European history that lasted from the 5th until the 15th centuries. It began with the collapse of the Western Roman Empire, and was followed by the Renaissance and the Age of Discovery. During the Middle Ages the Royal Family and the Church held the purse strings. The Church and Royalty allocated capital.

The Industrial revolution that followed shifted this responsibility to a small group of industrialists and those that financed them. Their bankers.

This continued on until the late 1960’s where a  few major institutions in most countries worldwide allocated capital to their privileged clientele.

Many think that the Facebook IPO should have been the catalyst that welcomed in a new era where investment took place at the intersection of social media and community finance. In other words the democratization of finance. Facebook already had hundreds of millions of “fans” that loved its brand and if given the chance would have invested. However it was not to be.

From September 2004 until March 2011 those privileged to be on the lists of chosen funds and merchant banks invested while the public could not. When it became time for the privileged early investors to make a profitable exit the price was sky rocketed up as “fans”, (effectively mum and dad investors) paid many times what previous investors had paid only to see the stock tank shortly after they bought it. 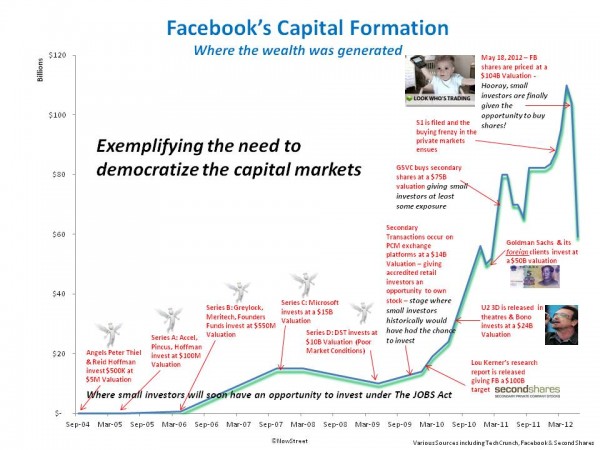 The above graph courtesy of Dara Albright shows the valuation in billions when investors were allowed to buy shares.

Equity Crowdfunding platforms are positioned at the intersection of social media and community finance. By intelligent use of the internet these platforms will connect investors and entrepreneurs with efficiency, transparency and without exorbitant intermediary fees and influence.

The democratization of finance is a response to the lack of investment in productive activities in today’s societies and the speculative excesses experienced and read about by the mum and dad investors. These unaccredited / unsophisticated investors know that it is wrong to be permitted to put thousands of dollars through a a one arm bandit gambling machine when they are not allowed to invest in a mate’s company or early on in the next Facebook. This is a tide that will not turn back.

“The crowd is telling us loud and clear that they are no longer willing to be the “exit strategy” for the privileged. Until smaller investors are afforded equal growth opportunities, our capital markets will continue to deteriorate.”