Crowd is a broad word and it can be your crowd (or tribe), someone else’s crowd (their tribe) or an awaiting crowd in the big wide world.

While many a crowdfunding raise yearns to leap into volumes of people that the offering has no contact with at the start of the raise, in reality, not a great many are successful in this leap.

For the purpose of this blog post’s subject … “Crowd” … is what Kevin Berg, a great Crowdfunding researcher, formerly from massolution, termed third level survivorship participants. I know that 1st and 2nd level contacts are part of the crowd but bear with me.

While reading the latest publication in the crowdfunding world, the Australian CAMAC report, I thought how much it was structured around the crowd at the third level. People with no connections to the capital seeker at raise start. This is not a bad thing but to get a raise away for say $500k to people that you don’t know, with little or no curation by the platform is a tough gig for an opportunity that hasn’t any runs on the board and is in startup stage.

Yes there are some really really attractive startups at a very very early stage that raise investors pulses but most don’t fit into this category. Most need lots of 1st level and 2nd level contributors to kick them off. To reach say $500k these people (friends, fans and followers) need the ability to contribute more than $2,500 per annum. With the adoption of the CAMAC regulations there will still be a restriction that only 20 of these investor types (1st level and 2nd level) can contribute over $2,500 unless they are accredited investors.

The Australian Government report on Crowdfunding, produced by CAMAC, is a well researched, well written, balanced and convincing document. They did a good job.

However many submissions requested that the small scale offerings exemption be lifted above 20 investors so that those known to the company (their tribe), that don’t belong to the third level “crowd”, can support their mates endeavour. These important players in many raises were not addressed in the report.

The stats below show that most raises have under 100 investors and the ones that do truly leap over to the third level is about six in one hundred.  CAMAC stuck strictly to their brief, no issue there, its just that the eventual implementation by the government needs to be a bit more holistic so that it matches those that are not professional and sophisticated investors but due to their contact and connection need to be in a position to invest more than $2,500.

The reports fundamental premise in CAMAC’s words is that “The terms of the equity offer may permit acceptances by potentially hundreds of investors, or more, who may have the choice of contributing very small amounts in return for equity”.

However this fundamental premise can be in contrast to what often happens in reality with many raises.

To reach “the crowd”,  as part of an equity raise, where “hundreds of investors or more” reside,  the startup needs to reach, third level survival. (see diagram below)

In the CAMAC case, the crowd (or third level) will be made up of “retail” or “unaccredited” or “mum and dad” investors. This report was not about professional and sophisticated investors.

Both Crowdcube and ASSOB’s equity funding platforms have been operating for a number of years with “retail” or “unaccredited” or “mum and dad” investors. In ASSOB’s case 63% of investors come from this category.

If you scroll through the 101 completed raises on Crowdcube most companies have obtained under 100 investors to achieve their targets. And here you can invest as little as a  hundred pounds if you choose!

Only six of Crowdcube’s raises have over 200 investors and these stats are pushed higher relative to Australia because of an incentive to invest. In the United Kingdom they have tax laws where losses you make on approved early stage investments are tax deductible.

While existing 20/12 regulations in Australia result in ASSOB’s average number of investors being much lower, after 300 or so raises, based on our extensive experience, less than 5% of those raising capital would have reached the “crowd” with success. Meaning third level survival.

Yes Reward Crowdfunding can have a crowd of hundreds and thousands of contributors , and does, and yes many of them reach third level survival, but not many retail investor / unaccredited equity crowdfunding raises do.

This means that the belief that “hundreds of investors, or more” will be involved with these raises has skewed the solution put forward by CAMAC. The resulting legislation will be mostly beneficial to  those startups that are attractive to the third level “crowd investors”. The report almost suggests this itself.

“However, the success of CSEF for issuers rests on one key factor, which is outside their control or the control of advocates of CSEF or of intermediaries, namely, the level of take up of equity offers by crowd investors. Sustainable growth, productivity and competitiveness through CSEF are only possible if investors have confidence in investing through that process.”

In a BRW article John Kluver CAMAC executive director  says he remained unsure of whether there was pent-up demand from individuals for the ability to invest in start-ups. “If we look at it globally, it’s still an unanswered question because in so many jurisdictions, crowdsourced equity funding has not yet commenced,” he says

However there are enough emerging statistics worldwide from ASSOB, Crowdcube and virtually every State in the USA that has brought in it’s own regulations for equity crowdfunding that the players in unaccredited/retail investor crowds, that end up investing are much smaller than those in the reward crowdfunding space and they are usually not a great distance (one or two levels) from the entity and people and technology seeking capital.

In reality the focus should also be on how legislation can assist those near and dear and interested in the enterprise to contribute to the people and technology they passionately believe in. This was the main driver in our submission to CAMAC. While the “crowd” aspect has been very well handled in CAMAC’s report the following categories urgently need attention:

In summary, CAMAC framework is a very good solution for raises that are “crowd” based. However most raises have a blend of investor type.

If you want $500k or less for your startup there needs to be a more viable and practical way to achieve it.

An adjunct to the CAMAC approach was suggested by the writer here in a pre-CAMAC report suggestion. 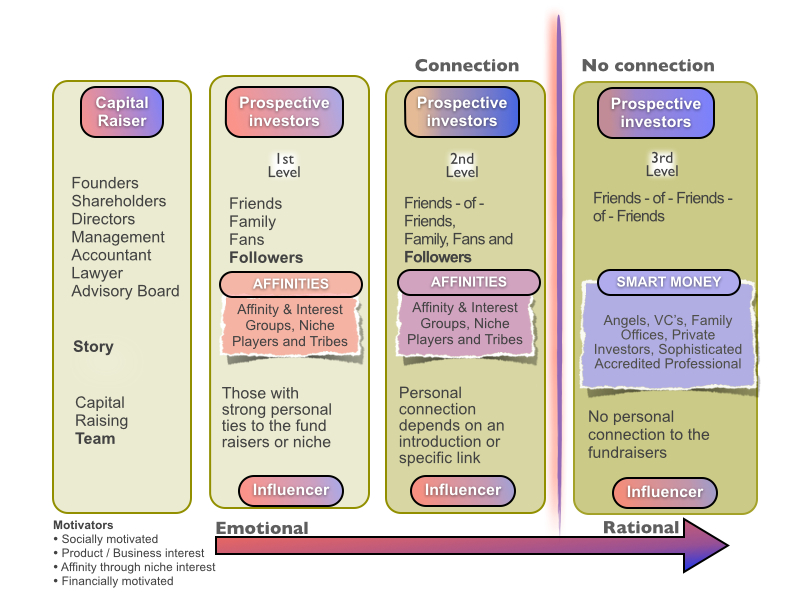