If we look at regulatory implementations of the equity crowdfunding around the globe most are not holistic.

For the most part they are regulated with new regulations totally independent from the environment they are expected to operate in. In other words we seldom see holistic equity crowdfunding. Where it is not holistic we usually have nice shiny legislation but few players.

Whether it be the Italian Hi-Tech sector, American Intrastate or New Zealand’s licensed approach all make compromises in the pivot between investor protection (regulatory environment) and empowerment of the entrepreneurial ecosystem. Result … low traction.

The implementation balance to date tends to favour investor protection which is not unusual as it is regulators and legislators that are primarily responsible for implementation. Often they have no experience or expertise in either the small business and startup ecosystem nor in the early stage investment environment. However in the United Kingdom equity crowdfunding platforms have been coupled to a conducive and empowering entrepreneurial investment environment and that seems to be working the best of all. They were also greatly assisted but a facilitative and hands on involvement of the U.K. regulator.

While New Zealand has the best in class crowdfunding regulations, traction is held back because the cost and time taken to get licensed means only well healed participants can run platforms and these platforms, because they are determined to hold onto their license and seek to enjoy their privileged position, are choosey with the listings they have and it is doubtful volume traction will eventuate. Thus in the chart below it is bottom left for New Zealand although they are nearer to the sweet spot than most. 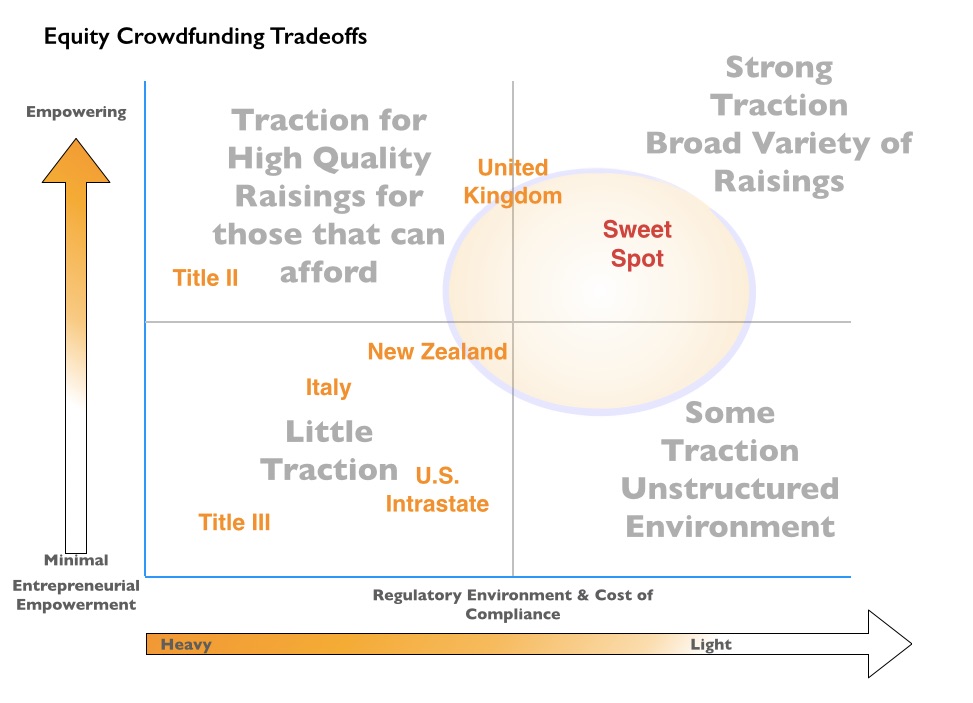 U.S. Intrastate regulations have heralded in a lighter regulatory environment but confining it to the home state is not so empowering for most entrepreneurial raises. Thus bottom left also.

Italy, which has had regulations for over a year now has not achieved large scale traction and raises are confined to a particular type of company. This is not empowering for most entrepreneurs.

The Jobs Act Title III is trapped in bottom left as the compliance cost of a raise is estimated at around $80,000 so this is hardly empowering for entrepreneurs. Firmly bottom left here.

Title II however is in top left. A lot of these companies would probably have got funding through traditional VC and Angel activity but being online broadens their opportunity into “crowdfunding”. Regulations are still onerous though.

United Kingdom, with their tax advantages to investors creates an empowering entrepreneurial environment while regulators have allowed a conducive regulatory environment to morph.

So whats the answer?

Firstly, to be holistic the implementation of crowdfunding cant be just about crowdfunding.
The entrepreneurial environment also needs to be considered.
So does the investment environment.

At the moment most legislators, including the Australian government, are working off checklists of the best “ crowdfunding regulations” worldwide and attempting to implement them straight up independent of all the other things that are needed to grow businesses and create jobs.

Crowdfunding regulations need be fashioned and intimately linked with what needs to be in place to grow businesses and create jobs.

In summary, crowdfunding regulatory implementation needs to be holistic.

The following areas need to be covered in addition to modifying the best of class in crowdfunding regulations worldwide (the easy road for most regulators).

2) STRUCTURES: Corporate structures that make having more than 50 shareholders inexpensive.

3) INVESTOR FOCUSSED: Mentoring for Startups and Growth companies so they pitch well at the “right” investors types for them

4) UNIVERSAL: Recognition that this is not just about Silicon Valley bound companies, thousands of businesses can benefit from equity crowdfunding.

5) COMPLIANCE: Compliant entity structures need to put the onus on the issuer or fund raising company and not on the platform.

6) FAIRNESS: Fairness and transparency for all investors, issuers, intermediaries and platforms

Lets look at each of these in more detail …

Requirements:
1) RISK AVERSION: Investor risk aversion through schemes like the United Kingdom EIS and SEIS schemes empowers the entrepreneurial environment. Witness the United Kingdom. The UK Enterprise Investment Scheme (EIS) is designed to help smaller, higher-risk trading companies raise finance by offering a range of tax relief to investors who purchase new shares in those companies. EIS has become a well established cornerstone of the UK government’s efforts to support the flow of capital to small to medium enterprises (“SMEs”) and is supported by both tories and liberals. The scheme has proven a huge success with over 2,000 companies raising over £175 million of SEIS investment from the time the scheme launched in 2012 up to July 2014. Both schemes have become important contributors to the economy in areas where the banks have been unable to assist. If investors are willing to back startup and early stage growth companies that everyone agrees are the ones that create jobs then the government should assist by lowering the risk threshold for investing.
2) STRUCTURES: Corporate structures are no longer one share for mum and one for dad. Just as more people trade shares online, belong to loyalty programs and own and operate their own pension funds, more people seek to invest, or are involved in the formation of new companies.The concept of mum and dad companies with one share each is well in the past as the multiplicity of skills needed to drive modern entities means our concept of a “private” company is outdated. In the future many people will provide both capital and sweat equity to get a business going. Accommodating them to do so should be easy, certain and inexpensive. Arbitrary figures like 50 shareholders are remnants of the past. Corporate entities should easily accommodate hundreds of shareholders and give them certainty that for their contribution they own a legitimate share of the business.

3) INVESTOR TYPES: Many government assistance programs focus on the production of business and marketing plans. Few focus on becoming investor ready which is often a more valuable initiative. We have seen with the development of incubators and accelerators that becoming investor ready is where the action is. Every investor has different requirements. With equity crowdfunding many regulators are fashioning legislation for the top right in the diagram below. In doing this they are not recognising that every year thousands of businesses obtain investment from friends, fans, family and followers that is handled in an ad hoc fashion and not as well as it would be through a modern equity crowdfunding platform. In the diagram below we can see that crowdfunding raises that may proffer that they will deliver a 10 times return often don’t have the evidence and credibility to support this. Thus in the absence of interest from Angels and VC it will be up to friends, fans family and followers to support the endeavour. 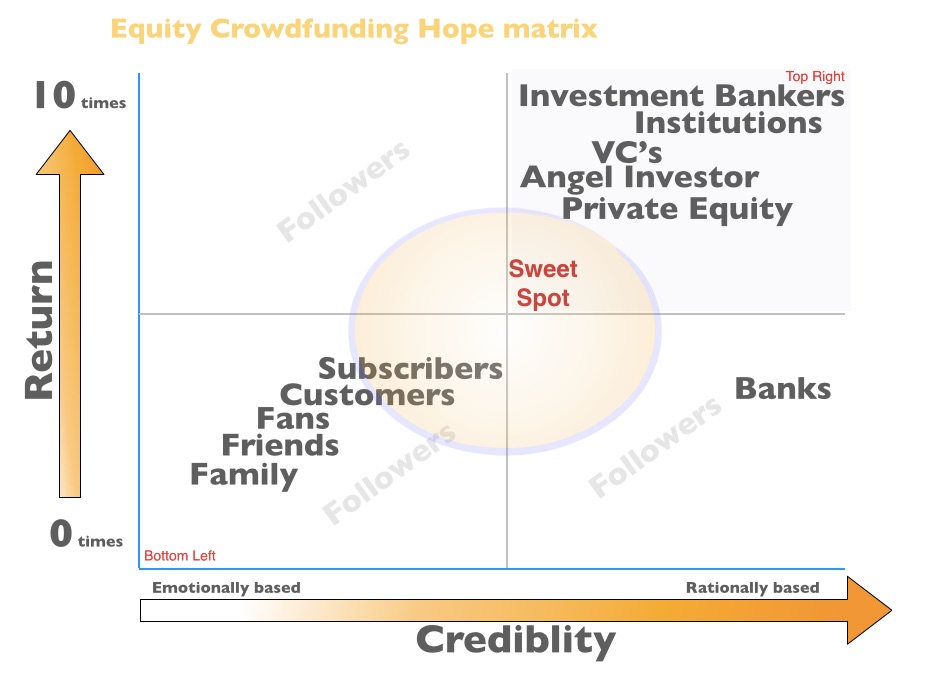 4) UNIVERSAL: Recognition that this is not just about Silicon Valley bound companies. Thousands of businesses can benefit from equity crowdfunding. By far the largest amount of investment in Startups and growing SME’s comes from the crowd around an entity. It’s friends, fans, family and followers. Regulators seem seduced by the figures from reward crowdfunding and have extrapolated them as how equity crowdfunding will unfold. There is no evidence that 100’s and thousands of investors will flock to equity crowdfunding raises. There is plenty of evidence that they wont. Crowdfunding regulations should recognise that it is not just the high profile Silicon Valley bound companies that crowdfunding regulations should fashion regulations around. Regulations should cover investment from the both the companies own crowd and crowds gathered from the the world at large.
5) COMPLIANCE: Compliance structures need to put the onus on the issuer or fund raising company and it’s promotors and not on the platform. If regulators would have put the onus on eBay to check all listings and be responsible for non-delivery, their platform would never have grown to where they are today. The same with Gumtree, Kickstarter, Alibaba and even dating sites. Matchmakers are just that. They match a willing buyer with a willing seller. In all these cases the platform does not write the text for each offering, nor do they selectively market any of them on the basis of recommended offerings. This also should be the case for small scale equity offerings. It is the issuers offering and the platform should not give advice or guidance as to whether this is a good offering or not. The trend regulators like New Zealand and Austraia are taking by licensing platforms and giving them responsibilities for offerings will never deliver traction as they can never really assess an early stage opportunity. Licensing puts the breaks on and destroys innovation and initiative. Even Angel investors that operate on the top right of the above matrix only usually get one in ten right so how can we expect a licensee will make any difference. The Corporations Act should be the Police here not the Platform.

6) FAIRNESS: Transparency and informed investor commitment assists fairness greatly. If the compliant structure and the Corporations Act empowers compliance then every stakeholder needs to be welcomed into the transaction in an informed manner. That means that investors receive all the information they need to make the decision and then acknowledge by an action that they have received sufficient information. By doing so they admit this is high risk, they confirm they understand they could lose all their money and unless the promotors have breached the corporations act they are effectively on their own and have no recourse against the platform nor the promotors.

… then we will have holistic crowdfunding and a lot more traction than we have today.