If I go back to 2008, in the very early days of Equity Crowdfunding,  the ASSOB platform has already been operating for around four years. This meant there were plenty of learnings in place even before any other equity platforms had started.

There are parallels here with ICO’s as in the early days many people that approached to raise capital on ASSOB had not much more than an idea or a sketch in paper. We learnt as the years went by that the existing regulatory structure was not detailed enough to protect investors so we put in place our own compliance framework. This stood the test of time as 300 odd raises later no evidence of fraud has emerged. This included an “offer document” not dissimilar to the “White Papers” that set out all aspects of the raise including:

This was not prescribed anywhere in regulations for documents that weren’t disclosure documents but over a period of time things like quarterly reporting, annual accounts and other things were added to the mix.

With ICO’s I see the same effort by early adopters in their documents. There is an eagerness to be transparent and provide valuable and essential information for prospective funding providers. However as these are early days there is a widely disparate level of transparency and disclosure by ICO promoters. This is to be expected but just as equity crowdfunding evolved around the world as players engaged with regulators, so will the ICO area.

The main difficulty at ASSOB from 2004 to 2010 was that entities often had no turnover, maybe not a product and no track record. The question was how do you assess these companies  as potential investments. This same question is front and centre for ICO’s.

We solved this at ASSOB by using “Fundability Circles” to assess opportunities. It was in 2015 that I was I thought it would be good to update this and do an ICO version. 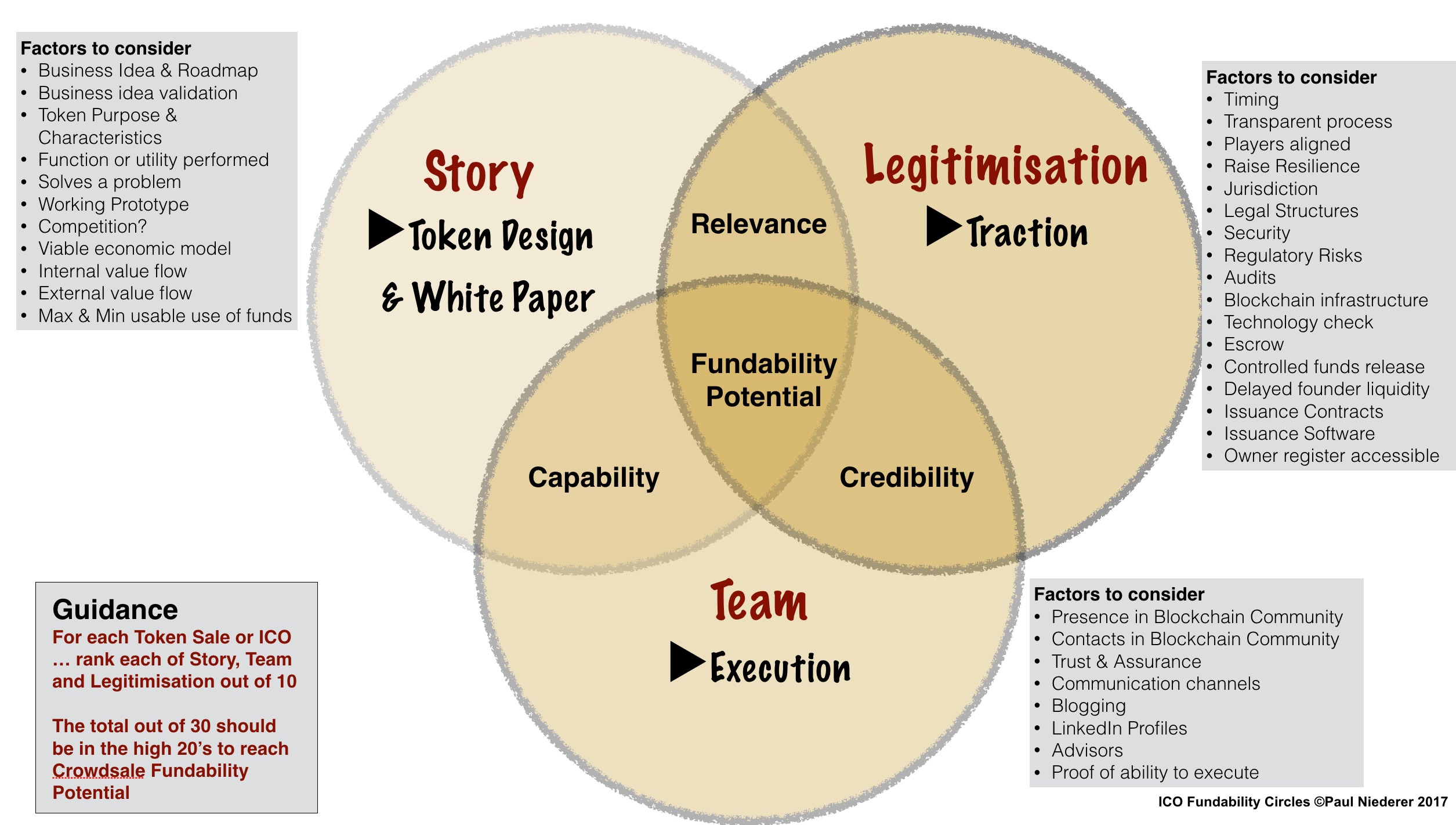 Here is how you use it!

When you look at an ICO opportunity the three circles equal the main areas to assess a raise. I’ve listed some factors to assist you but basically each of the areas should have a total of 10 points with the total being 30. Obviously if you get 30 out of 30 for an ICO raise you are good to go. What happens though is usually one area is much lower than the other two. Often you can have a great idea with a very technical team but nobody in marketing or legitimisation. Or at other times the marketing team is great but the people are not around to build it.

Most ICO “White Papers” usually include Story, Team and Legitimisation but often they are weighted differently in each white paper. If you are involved in an ICO, or you are promoting one, you should yearn to get balance in the document that reflect the three areas. (Note the intersecting areas between each circle)

Trust this assists you with your ICO. After seeing 300 odd raises go through this process it is indeed a great way to get an early grip on the possibility of success or as it says in the middle … the “Fundability Potential”.