Matthew Pinter, Paul Niederer and Chris Gilbert were guests on Switzer this week on Sky News for an interview on Crowdfunding. While the panel primarily included equity crowdfunding or investment crowdfunding representatives pledge, reward and realty crowdfunding were also covered.

Peter Switzer asked if we had come across any circumstances where smart alecs get involved and deceive people. I replied that after 300 odd raisings we were fraud free. What is important to note though is that times have changed. In the 1930’s Securities legislation was strengthened because people were sold things (stocks and shares) when they had no way of checking out if the investment was as the promotor said. When they investments turned sour, and the person that sold them the stocks and shares was long gone, the regulators stepped in with a heavy hand.

The heavy hand is no longer needed. With the transparency and due diligence opportunities the internet provides any rip off merchant can no longer hide once they have deceived people. A simple internet search will stop them becoming a director or promotor of an opportunity listed on a crowdfunding platform. Both platforms on the Switzer show, ASSOB and Equitise perform due diligence on the people, the IP and the entity behind the raising which includes both bankruptcy and bad actor checks though formal channels and google. 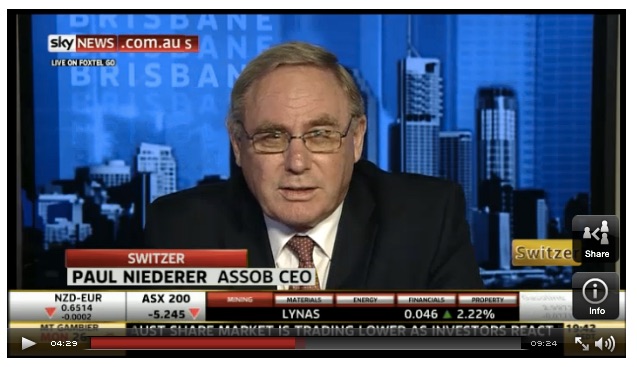 The Crowdfunding Institute of Australia (CFIA) is the peak body for Crowd Funding in Australia.

The CFIA recently completed a survey on equity crowdfunding to measure interest and awareness for the budding Australian investment crowdfunding industry. The purpose of the survey was to provide a nationally representative response to the Australian government’s recent discussion paper titled “Crowd-sourced Equity Funding”. The paper outlined three potential directions for equity crowdfunding in Australia for 2015. This discussion paper was published in late 2014 and will be the focal point of regulatory discussions later this year. The consultation by the Australian Treasury and the Small Business Minister Bruce Billson follows a report by Corporations and Markets Advisory Committee (CAMAC) that was generally considered as “totally unworkable“. Subsequent to this the Treasury produced “Crowd-sourced Equity Funding” report has taken a more balanced perspective and has brought in for discussion the operating crowdfunding regime in New Zealand. The New Zealand rules have been met with a more positive response as New Zealand has chosen a more light touch regulatory approach however they have still chosen a licensing path which will permit only well heeled platform backers and curated issuers to take part.

Results of the CFIA survey were presented to Treasury.