While in Thailand on holiday I noticed that having your own stall, stand, shop or business is often the difference between survival and poverty. There are hundreds of thousands of businesses like this. Imagine if you had a business that was valuable to the village and you wanted to raise funds by getting a some village folk to invest. Equity Crowdfunding. Imagine your disappointment if you were told your business is part of a potential “new asset class” and as such  you may pay up to $80k to enable a few mates to invest in their business!

Sounds incredulous but it happens every day.

Look at the Jobs Act for example.

Trumpeted for its ability to grow small businesses and create jobs in the unaccredited investor space it (Title III) hasnt got of the starting blocks.

What has though are raises under existing or modified financial regimes (Title II) that have operators with financial services licenses that hand pick deals for accredited investors and instead of a rolodex they have an excel spreadsheet of contacts or use a CRM system and have a “crowdfunding platform” to harvest a few new clients or appear very modern.

Here is the spectrum …

So in your country who is driving the discussion for unaccredited or Title III crowdfunding? Is the Small Business part of the Government or the Financial part of the government?

And when you drill down are they in the “New Asset Class” team or in the “Small Business Empowerment” team?

Do they understand that only a very few companies, maybe 1 in a 100 will ever qualify to suit an “asset class” regime. For stats look at the Angels. Most Angel groups look at a couple of hundred deals, they get a short list of say 10 and maybe invest in two. Only these two would probably suit an ‘asset class” regime. The rest are ordinary small businesses that wont offer the possibility of a 10 bagger or 10 times your money back. To further strengthen this argument … of the ten the Angel Investor invests in  … usually only one or two work out. On my calcs thats one or two in a thousand.

After 300 Small Business raises one thing I have learnt ….

If an equity crowdfinding  raise IS ATTRACTIVE to an Angel or a VC, and that is maybe 5 out of 100 raises then it may be a candidate for an “asset class” quality raise. Needle in a haystack. For evidence we can see that one of the most active companys in the secondary sales of unlisted stocks, SecondMarket.com has moved from providing a trading venue for unlisted stocks to offering technology that companies can use when conducting share sales. “We are not focusing on connecting investors with the companies or these opportunities,” Silbert Second Market’s CEO, said. Which basically say’s while Facebook and Groupon were unlisted shares that were attractive there are thousands of companies that are better off managing their own secondary sales with SecondMarket’s assistance rather than running an exchange or platform for a supposed large “new asset class” that simply isn’t there. This is ASSOB’s secondary sales experience also.

For many ASSOB raises the companies are making things like plastic wine barrels, network solutions, bottles of fruit juice, pension portals, titanium welding systems and children’s furniture so it will take many years for the company before an “asset class” regime is appropriate. Setting the bar this high from day one is a total disincentive, not appropriate, and given an “asset class” regime they simply wouldn’t have raised the funds to get to the asset raise stage. “Catch 22″.

Viewing unaccredited equity crowdfunding investment through the eyes of regulators, intermediaries, regulated platforms and accredited investors eyes is like signing a death warrant for them. If we want this small business environment to flourish like eBay, Kickstarter and other platforms that matchmake transactions under say two million dollars, where the majority of the funding comes from friends, fans, family and followers of the entity raising funds, small business representatives need to be the drivers not the regulators. The premise or driver should be investors know what they are getting into. They know it is a gamble. It should be treated like a gamble. All that needs to happen is that every investor clearly and unequiviclaly signifies to the world that they are fully prepared to lose the money and acknowledge that it is a total gamble.

Country after country is trying to shift responsibility for this onto the platform or intermediaries. Why should they be responsible for someone who is actually gambling. In many jurisdictions following an ‘asset class” mentality to get a platform licensed and operational, costs at least $100k up front and high monthly operational costs from then on. In the U.S. it is estimated that each raise will cost over $80,000 just to raise say $200,000. Obviously neither the platform nor the small business is going to take that route.

This means that only participants at the “Asset Class” end of the spectrum can firstly afford to run a platform and secondly only raises that are attractive to accredited investors get off the ground. Why? It takes the same time to run a small raise through the platform as it does to run a large raise, and usually small raises actually take more time as the capital raising team is smaller and less versed.

Only those firmly in the “new asset class” side of the table will use it for their handpicked curated raises that probably would have got funded any way.

Thats why anything in the bottom left of the diagram below has little traction other than the occassional high profile raise. Licensing unaccredited investor equity crowdfunding read (Title III) on the basis that every unlisted company raising capital is part of a new asset class is overkill and counter productive.

All the time and money that is being invested by government, regulators, support industries and platforms to create a supposed “asset class” based crowdfunding regime in countries around the world  will be if no use if the objective is to create a climate for small businesses to be more easily funded. Shiny new regulations may be in place but they will be inappropriate for this sector of the market. See my article on “Holistic Crowdfunding” 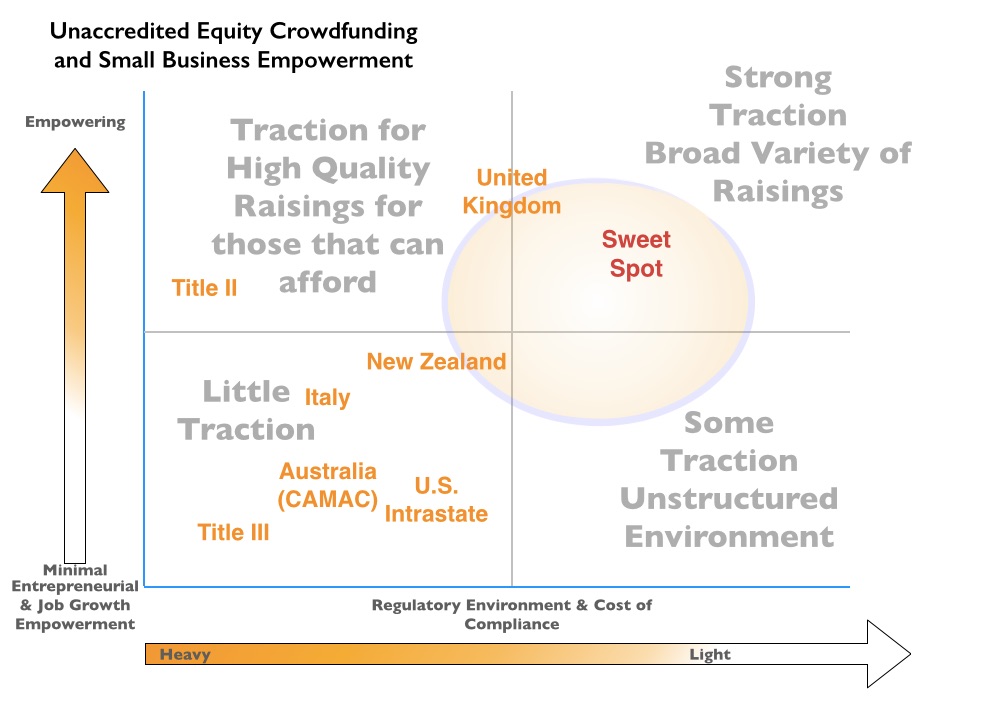 Do the maths yourself. Check out those countries in the bottom left. You can count the unaccredited investor raises they have done on one hand for each country. If you have the numbers work out what it cost per raise to get the regulations in place!

To read why the United Kingdom is not in the bottom left read more here!