In April 2010 I tried an experiment for a week working from a place called Huay Yang in Thailand.

With wireless internet, Skype and the occasional mobile call it worked perfectly. That set the stage for a larger endeavour. Heading off to Thailand for a month at Xmas time with the last two weeks being working weeks. That is from the 10th to the 21st of January.

Set up was an iPad for web work and the occassional email from out on the verandah, a Thai mobile SIM card in a cheap mobile, a MacBook Pro with a cloned copy of my office hard drive, my iPhone with roaming turned off but SMS still receiving and a Polycom Skype Communicator.

Working virtually from Huay Yang or Huai Yang worked briliantly and for those wanting to do so you are welcome to contact me or take advantage of the info below.

Firstly … Where is it. About 5 hours south of Bangkok by taxi

Secondly … How to get there. From Bangkok Airport two recommended ways to get to Huay Yang

By Bus. Other than taxi the most comfortable way to HUAY YANG is by air-conditioned bus.  From Bangkok’s southern bus terminal (or Sai Tai Mai in Thai), you can catch the bus of BANGSAPHAN TOUR company  from 07.30 a.m. to 23.00 p.m. daily (almost every two hours from Bangkok). The ticket costs about 315 Baht per person. The journey takes about 5 hours to HUAY YANG and the bus will stop 20 minutes for lunch/dinner. They should know Huay Yang but if not the nearest large town is Prachuap Khirikhan.TO KNOW YOU ARE ON THE RIGHT BUS LINEAs long as it goes through the following major towns … Bangkok, Hua Hin, Prachuap Khiri Khan and Huay Yang. Other busses not with BangSaphan  Tour Co will go through Bangkok – Hua Hin – Prachuap Khiri Khan – Huay Yang  but this is the one the local bus station recommends. When you get to Prachuap Khiri Khan it is about 30kms left so ask the bus driver to let you know when to get off at Huay Yang 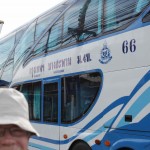 By Taxi. There are many different Taxi Drivers that specialise in this route. They will meet you at the airport at any time 24/7 and transport you to Huay Yang. It takes around 5 hours but boy is it worth it. They will also transport you back to the airport or to Bangkok if you want to stay a couple of nights. The taxi service we use is 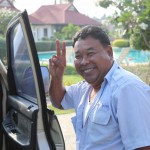 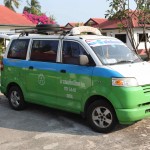 Where do you stay once you get there?
First a bit of history.
Just a few years ago Huay Yang was a small local fishing village. It still is even though there are approximately 400 houses in special areas. These first of these houses were built by a couple of enterprising Swedes who had Thai girlfriends.
They managed to build 6 different areas initially called from Orchid 1 to Orchid 6 containing around 150 houses.
We love the Orchid areas though there are also areas called Jasmine, Botanica, Lotus, Lantum, Colibri, Nishaville and Jack’s Beach.
To select a place and book check out this website and then email Inger, she will take care of you. I know the website is in Swedish but if you write to Inger in English she will look after you. 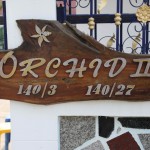 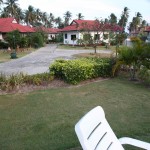 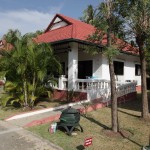 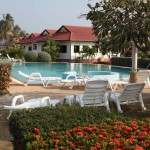 Shopping. Not much other than supplies. There are European household and bathroom products but not much else. Nothing else to spend your money on which is good. Here is what the shops look like: 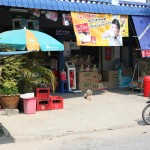 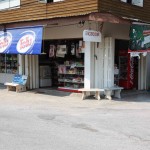 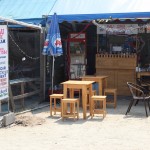 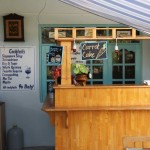 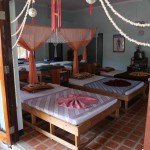 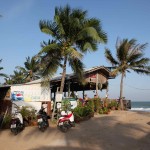 Our favourite
Restaurant Nong’s on the Beach 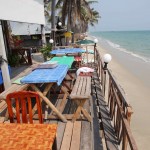 This is what it looks like from in the Restaurant